The tadpole we brought back from a pond yesterday is still alive and is being fed on pond food. It has been named Squirmy. For good measure we have a small crustacean type thing that came with a clump of algae. It is also just coming back to me that tadpoles produce a fairly constant small tube of, errrm, poo, and that their makeshift ponds soon look a bit messy.

The tadpole looks as though it is on the verge of growing legs, but isn’t doing yet.

We just finished Stig of the Dump by Clive King as a read-aloud. It was greatly enjoyed by Antonia and would be a fine choice for all the ‘last child in the woods’ types. If you appreciate the contrast between attending a fancy dress party in a caveman and leopard costume made from things found in a dump versus a shepherdess costume ordered specially from London, you’ll see what I mean. It’s quite a mechanically minded sort of book too, in that it goes into lots of detail about how Barney, the hero, actually goes about, for e.g., lowering things into chalk pits, building a chimney with tin cans and windows from jam jars etc.

Stig was one of the books that was supposed to be a classic when I was young, though somehow I missed it first time round. The most unexpected thing was the time-travel or magical element that allows Stig, the prehistoric boy to meet Barney and Lou. It was definitely there but quite understated compared to my expectations. It just kind of happens without much fuss, but most of the story is extremely concrete and everyday. Well actually, apart from the bit with the burglars, which was a bit Enid Blyton, but fun anyway.

We bought (Antonia chose, I paid for) an Astrosaurs book in the airport bookshop on our way home.  I am not at all sure this counts as homeschooling, though I do think its good for children’s reading skills to read large quantities of enjoyable trash just for fun.  That being said, I wish two things.

1. That the library would stock trash books instead of just literary masterpieces, because I don’t mind us buying the good stuff, whereas I would rather the trash didn’t accumulate in the house.

2a) That if I must buy trash, the publishers would ensure that it’s at least well enough put together that it doesn’t fall apart before the dear child has finished reading;

2b) That if it must fall apart the publishers would make an effort to ensure that a page number appears on every single page and not just a selected few, for the convenience of parents who have to put the d**n pages back in order again.

We got back from England having had a lovely relaxing time – well mostly.  Especially with the nature.  My parents have a pair of thrushes nesting right outside their patio window, and we spent a lot of time watching them scurry in and out with full beaks.  They clearly regarded us with suspicion, and if we happened to be outside, would often wait until we went in to head for their nest.  So we would go in on purpose.

They did not really choose the best place for their nest.  The morning after the family party my parents were really worried about them, because we couldn’t really keep everyone inside.  They were convinced the chicks had died.  But no.  By the time we were getting ready to leave we all agreed that the poor parent thrushes were looking very thin and gaunt.  Hopefully we will get some photos of the fledglings soon.

My parents enjoyed Antonia’s enjoyment of nature.  We went walking in the park and looked at trees, bugs, birds and hordes of tiny froglets hopping all over.  This was the most exciting to me, but Antonia was most delighted to hold a damsel fly on a stem or have a huge sleepy moth crawling all over her.

My parents are pretty pro-home education (the UK term for homeschooling) at this point, having seen the result.  My father is even apt to refer to his home educated granddaughter in a loud voice in public places.  This is partly because they see that she can read, write, calculate and recite poems with the best of them + at the same time she has lots of time to enjoy nature, soak up Shakespeare slowly, draw and play with her teddies.

There is also the fact that when you read the British Education Minister’s not so positive remarks on the subject of home education right there in the education column of the newspaper next to what it says about the state of British schools, he inevitably comes across sounding like an idiot.

It was quite hard work since this is the first time Antonia has gone without afternoon naps.  Today, back at my parents house I put her into bed in the afternoon, and after telling me she couldn’t sleep 10 000 times, she did!

We have been at the seaside for one long round of exhausting fun.  Pool twice a day, long walks along the beach and far too much food of all kinds.  This is the first year that Antonia has been old enough not to nap for much of the afternoon, and consequently we are all quite tired.

She has completely mastered the art of doing division from her multiplication tables, though.

We live in an area that’s rural in the wild sense whereas my parents live in what I have sometimes cruelly described as an agricultural wasteland.  It is the sort of place where, when you’re hiking, you tend to stick to the hedgerows and copses and be glad they’re there.  But it also offers some educational opportunities.  Antonia had never seen wheat growing before, let alone, barley, beets, corn and rape.  She learned about crop rotation and its purposes, and my mum found her some primitive horse tail plants growing in a freshly ploughed field.  Apparently these grow on impoverished soil, so that would seem to be a bad sign.

We also did some identifying of butterflies and flowers, got herded through a field by a flock of sheep that seemed unduly interested in us, and taught her the proper way of feeding a colt with your hand flat so it doesn’t accidentally bite you.

This was my little bit of contact with the homeschooling world for today! Some benighted homeschool football team whose priorities include ‘acedemics’ and ‘atheletics’, somewhere after God and family.  I resisted the temptation to comment.  They don’t like homeschoolers at Science Blogs and probably nothing will convert them.  Besides, its no skin off my nose if some random homeschoolers want to make idiots of themselves, just as, if I were a practicing scientist, I wouldn’t consider the whole enterprise invalidated because some jerk falsified some results.

Anyway, after a while I began to think that, spelling and religious worldview aside, the list is not terrible in principle.  Homeschooling parents are parents as well as educators and probably should put a child’s physical and psychological health before academics, and way before any ridiculous competitive sports (I will get into how I am doing this in practice in a minute).  If they send their kids to school they should still ensure that those are the priorities.  Not that I think intellectual development or education is unimportant.  Just slightly less important.  And for another thing an all round healthy lifestyle is a pre-requisite for successful academics in the first place.   As I find out every time Little Miss doesn’t get enough sleep for any reason.

Right now, we are on holiday which means that academics consist of me asking her maths puzzles and tickling her when she gets them right, her reading comic books and a chapter of history every day,  and….tadaaa… family and spiritual development!

This takes the form of my father’s Special Curriculum for Raising Skeptical Children in which the child learns that any utterance by an adult is just as likely to be BS as not.  The successful student should come up with some suitably pertinent and witty answer that avoids overstepping some invisible line that they have to discover themselves.  My brother and I are graduates of this particular course, but so far my daughter is in rather over her head.  Perhaps understandably, I had grown up in the belief that talking tripe with bells on is a man’s job whereas dh, being of the American persuasion, is apt to verge on the literal.  All in all, she hasn’t had much practice, and her responses have been a mixture of moments of pure genius, interspersed with exhaustion.

My favourite moment so far was when she stunned the old boy into silence for a while with a pun on the word ‘arse’.  It was a good pun, but unfortunately based on her sincere belief that an arse is a kind of donkey.  This morning we reduced her to exhaustion by 11.00 by explaining to her that you could easily understand the nature of the square root if you considered the carrot, which is a conical root.

She rallied round by lunchtime to nearly finish me off at hangman with the word ‘raze’. When I asked her if she knew what it meant she said “yes, you ‘raze’ a child”. I see her point, though I’m not sure if she did.

Fortunately it’s not all cruelty to children.  Grandad does get down on the floor with the blocks and stuffed animals for precisely one hour per day in which he does exactly what she tells him.  After that, we have to rally round to lift him up again with levers and pulleys and he goes off to tinker with his dvd player until it works so she can watch some ghastly film.  And he makes her whatever flavour of ice cream she desires with his own hands.

Grandma tends to stick to natural history and gardening.  This can be a little bit morbid because it tends to revolve around pest species and the things you can do to them. Still, it’s an education.

And me?  I had a lovely nap this afternoon.

What to do on a travel day?  Luckily we are ‘only’ going to the UK, leaving at 15:20 and probably reaching my parents’ house about 23:00.  It should still be light by then. In the meantime Antonia did maths while I packed, read some Horrid Henry, and we found time to look at this butterfly wing under the microscope.  The butterfly died on our terrace, so we seized our chance. 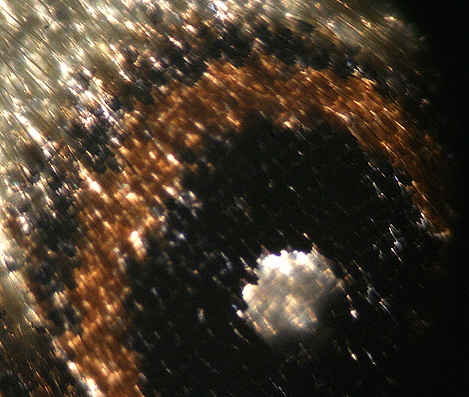 Antonia is still recovering from seeing Coraline, although I suspect she is playing it a bit for sympathy at this point!

I quite liked this film, Mike didn’t, but she was curled up in her chair with her eyes closed before it was halfway through.  A shame, because she had looked forward to seeing it.  And this, mind you, is the child who sat through Pirates of the Carribean 1, 2, and 3 at a friend’s house without blenching.  Coraline just pressed all her fear buttons.

It might be that we bear an unfortunate resemblance to Coraline’s parents.  I hope we are not so inattentive, but we are closely associated with computers.  Then there’s the division of labour – Mike does the cooking, I do the cleaning, which is the same.  And then, I suppose there is just the whole temptation of ‘better than life’ parents that many kids can maybe relate to and that turns sour in the film.  Or the fear of a door in your own house with a horrid witch behind it.  Whatever it was it genuinely, seriously upset her for a bit.  And to think that some people I know stake their faith on animations as opposed to movies with human actors for not scaring children.